How do primary school admissions and catchments work in Birmingham? 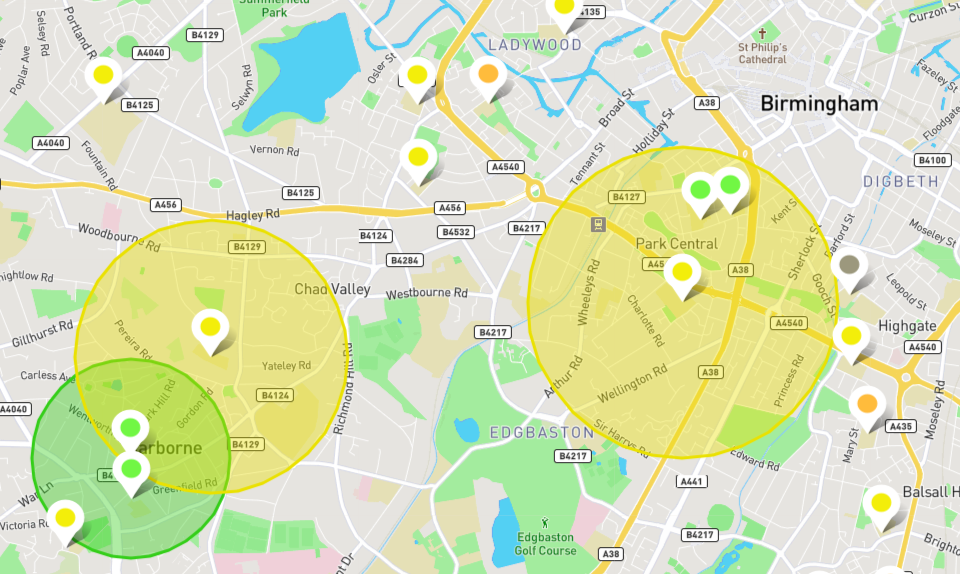 We’ve recently added three years’ worth of admissions data to our site for Birmingham primary schools, so I thought now was a good time to describe how primary admissions work in Birmingham (and by Birmingham, I mean within the boundaries of Birmingham City Council.

If you’re like me, catchment areas are probably the first thing that comes to mind when you think about getting your child into a good school.

But as I learned when I first set up AdmissionsDay.co.uk, catchments probably aren’t what you think they are. There actually isn’t any such thing as an area where if you live in it you’re guaranteed a place.

In fact, the area a school takes children from changes from year to year, getting smaller or bigger, based on who applies.

As an example, let’s imagine a school has 90 places and receives 450 offers. Imagine that 30 of those places get given to brothers and sisters of current pupils. That leaves only 60 places for other students.

The remaining 420 applicants are ranked by how far away they live, in a straight line, from the school. Then, the top 60 by distance are offered places.

Something like this happened for Woodthorpe Junior and Infant School in 2016, and the last student admitted lived 0.33 miles from the school, which makes a kind of effective catchment area for that school in that year, as shown in the image below. 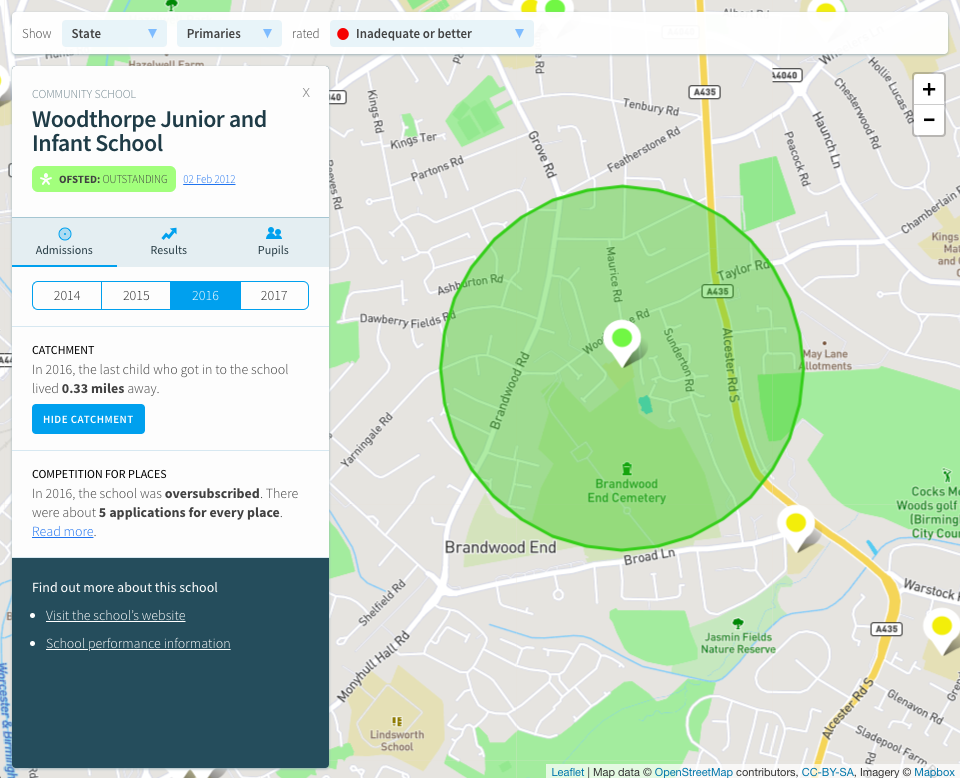 In fact, this is what happens for most primary schools in Birmingham. They have catchment areas in the shape of a circle that change from year to year, based on the distance the last pupil admitted lived. And if you’d lived closer than that in that year, you’d have got a place.

A few primary schools, like Chilcote Primary School, have what are called priority admissions areas. If you live in one, you’ve definitely got an advantage over someone who doesn’t as applications from within these areas are prioritised over applications outside, even if the ones inside are further away as the crow flies.

But you're still not guaranteed a place, as a surge in sibling applications one year can lead to increased competition. We've added the priority admission area for Chilcote Primary School to AdmissionsDay.co.uk, exclusively for paying customers: 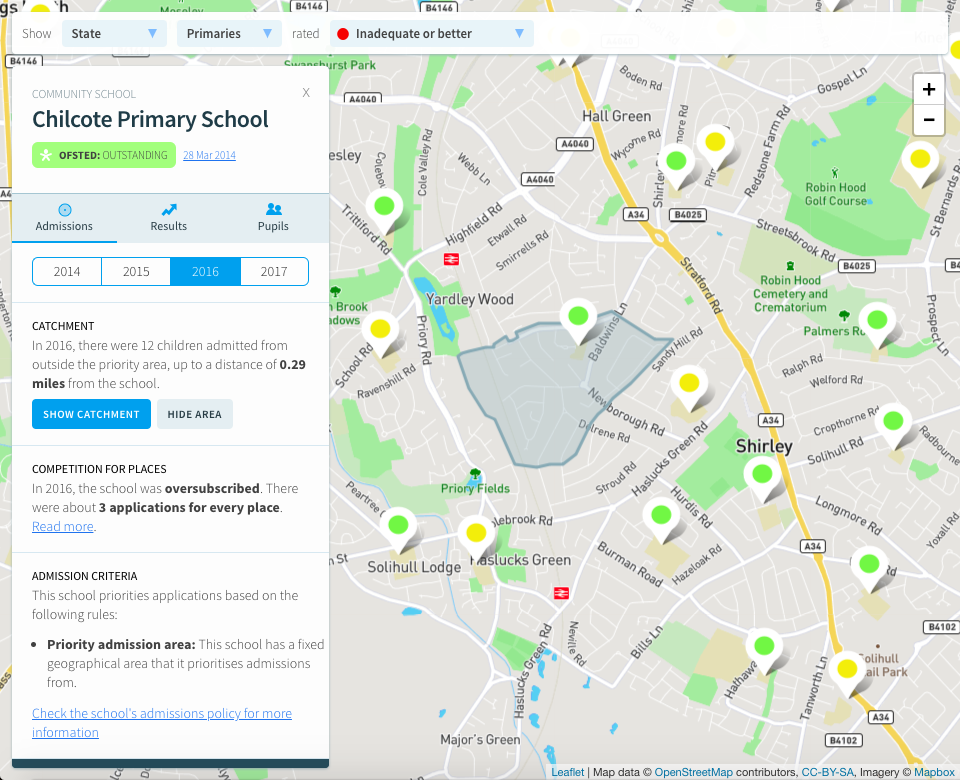 (If you know another school in Birmingham that has one, let us know and we'll try and add it in.)

So far, so complicated, but sadly it can get more complicated still. We’ve already mentioned that siblings get priority over distance, and from what I’ve seen in other places in England they normally account for 1/3 of places (sadly we don’t have this data for Birmingham).

But while about half of the 300-ish primary schools in Birmingham follow the criteria laid down by Birmingham City Council, the others are academies, free schools and religious schools and can set their own criteria.

Many of these academies, like Acocks Green Primary School (which is one of the most popular schools in the area) still use Birmingham City Council’s criteria. 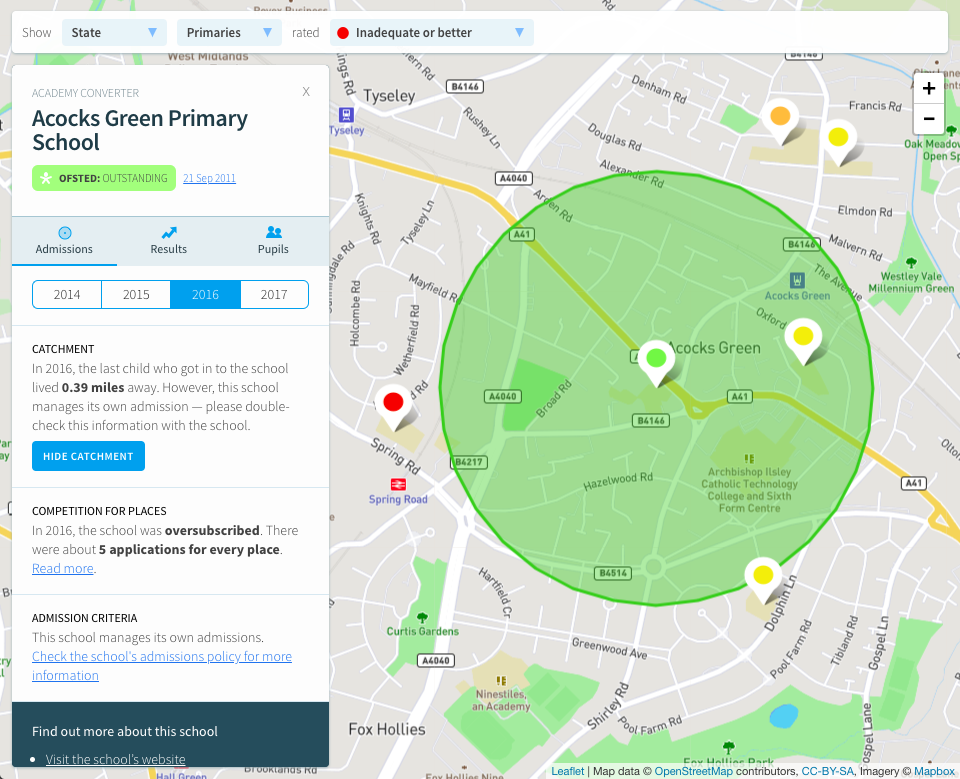 But some of them, particularly faith schools, set additional criteria. For example, St Ambrose Barlow Catholic Primary School, another very popular school, prioritises baptised catholic children and in particular those living in the parish of St Ambrose Barlow.

If you’re considering applying to a school, you need to find and understand these criteria. If you purchase access to AdmissionsDay.co.uk, you also get access to direct links to the admissions pages of around 95% of all schools that set their own admission policies.

When it’s time to apply to a Birmingham primary school, you can list three preferences — three schools that you would be happy for your child to go to. The vast majority of children get allocated to one of their three preferences, but some don’t, so it pays to think carefully about how you make use of your choices:

Enter a postcode, street or town to get started